Winning of the Health and Culture Prize

On Tuesday, Oct. 7, a ceremony for the 66th Health and Culture Prize hosted by Dai-ichi Life Insurance Co. was held in Hotel Okura Tokyo. 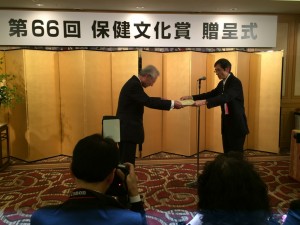 Since its inception in 1950, the Health and Culture Prize has been regarded as a prominent prize honoring groups and individuals that made remarkable achievements in the field of healthcare, such as promoting health and preventing diseases, and health and welfare of the elderly and people with disabilities, as well as measures for the declining birthrate.  In the current fiscal year, ten groups and five people won the prize and RMHC Japan has been selected as one of the winners.

Chairman Masayoshi Yanagisawa and Chief Executive Director Osamu Hirose attended the ceremony as the representatives of our organization and received the certification of commendation from the Minister of Health, Labor and Welfare, a certificate of appreciation from Koichiro Watanabe, the president of Dai-ichi Life Insurance, a list of prize money, a commemorative gift from Asahi Shimbun Social Welfare Organization and a commemorative gift from NHK Public Welfare Organization. 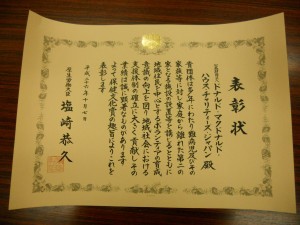 In receiving the prize, we would like to express our gratitude to everyone who has supported the Houses and will continue to expand the House activities and provide support to children suffering from illness and their families.