RMH Tochigi has reopened by 10 bedrooms!

On Friday, July 19, the RMH Tochigi which now has 10 rooms was unveiled. 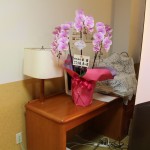 The House had 7 rooms and 96 families had to give up staying the House due to full occupancy last year. It was decided at the beginning of this year in consultation with the Jichi Medical University Hospital to increase the number of rooms in the House from 7 to 10. Construction for the expansion started after the Golden Week in May to open the rooms by summer vacation.

An “Association to Support Construction of Additional Rooms for RMH Tochigi” was established to raise money needed for the construction.  Shimotsuke City Mayor Hirose served as representative facilitator and Tochigi Prefectural Governor Fukuda, Chairman Mimori of the Tochigi Prefectural Assembly, President Takayama of the Shimotsuke Municipal Assembly, and President Aihara of the Jichi Children’s Medical Center Tochigi as facilitators and collected contributions from various sectors.

City Mayor Hirose attended and spoke at the ceremony, “Shimotsuke citizens will not use RMH Tochigi but are eager to support families of sick children who come to the hospital from outside the city for medical treatment.  So we want to continuously support the House.”

President Aihara of the medical center said, “As long as the Jichi Children’s Medical Center Tochigi will exist, needs for the House will not decrease but increase more and more. So I would like to ask as many people as possible to support the House.” 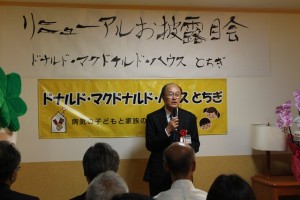 The association’s target amount of donations is ￥10 million and ￥9,873,841 has been raised as of July 10.  We will continue to welcome donations until the end of July and would appreciate your kind cooperation.